Provides information about how to use the UQ Research Data Manager (UQRDM) to store and manage research data for research projects.

Accessing and using the storage to upload and download datasets

For other collaborators added to the record, the process includes an additional step. They will first receive an email notifying them that they have been added to the project record. This email will contain a link to login and enable access to the storage. Following successful login, these collaborators will then receive instructions about how to access the storage in an email message (similar to the the email sent to the owner and UQ lead).

All collaborators (including the owner and UQ lead) can also access these storage instructions via UQRDM. To view these instructions, open the relevant record and click "instructions for access" at the top.

More detailed instructions on how to use and access the storage are provided.

I'm a HDR student (PhD or MPhil), but I cannot access my allocation folder via the R drive, why is this?

This is likely because you are using a computer/laptop that is signed in with your UQ staff account. To solve this problem, you will need to add your staff email address as a collaborator on the record.

Follow these steps to add another collaborator to the record. You should add your staff email address as a collaborator.

Note: It is important that you use a different browser (e.g. if using Chrome, change to Firefox) or an incognito window when accessing the link to login with your staff account.

If you require assistance with this process please contact ITS Support.

I just got an error message when deleting a folder via the UQRDM cloud web interface/sync client, what does this mean?

What can I store within UQRDM?

There are no limits on what you can store (e.g. all file formats are supported). If you have many small files it is advised that you create a zipped file to increase the sync speed when using UQRDM Cloud. For further advice on this process please contact ITS Support.

No.  The UQRDM website is for creating and managing your project records and the collaborators.  You can access the project data via the mapped R drive or via the cloud.  See how to access the data storage for these projects.

Is it possible to retrieve files I deleted a few weeks ago?

Yes.  The data storage has regular back up for up to 60 days.  Contact the ITS Support for retrieving deleted files.

Can I request more storage?

Yes.  Note that priority will be given to projects that are collaborative in nature - meaning those that have more than one person listed on the record.

Before you lodge a request for more storage, ensure that you and your collaborators fill (or nearly fill) the 1TB allocation.

To lodge a request for more storage, go to rdm.uq.edu.au, open your project record, click Request more storage, fill in the form and click REQUEST EXTENSION. 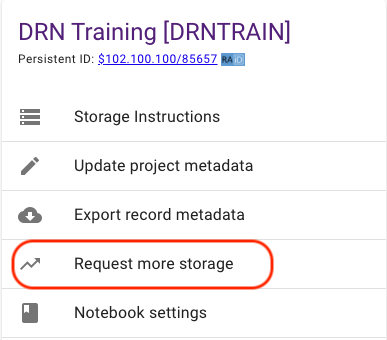 What will happen if I have an existing R drive?

Can I save and upload files via UQRDM cloud interface?

What does it mean if I get a conflicted file when using the UQRDM cloud sync client?

When a file is open in multiple places at one time a conflict file is created if both are saved, and it's unclear to the sync client which is the most up to date.

Note that the conflict file only ever appears in the local folder (not via the cloud web interface).

Important note: The situation could vary depending on different operating systems and software used. Contact ITS Support for further advice.

How do I access the storage if I am in the EAIT faculty?

Please refer to these EAIT instructions.

How do I access the storage via HPC facilites?

Please consult the how to access the storage via HPC facilities instruction page.