Provides information about how to use the UQ Research Data Manager (UQRDM) to store and manage research data for research projects.

For other projects on which you are employed (e.g. as a Research Assistant), please use your staff account.

If you are a HDR student and use your staff account to login to your computer please read our FAQ on accessing your allocation folder via the R drive.

How do I know if I am the UQ lead or owner of a record? 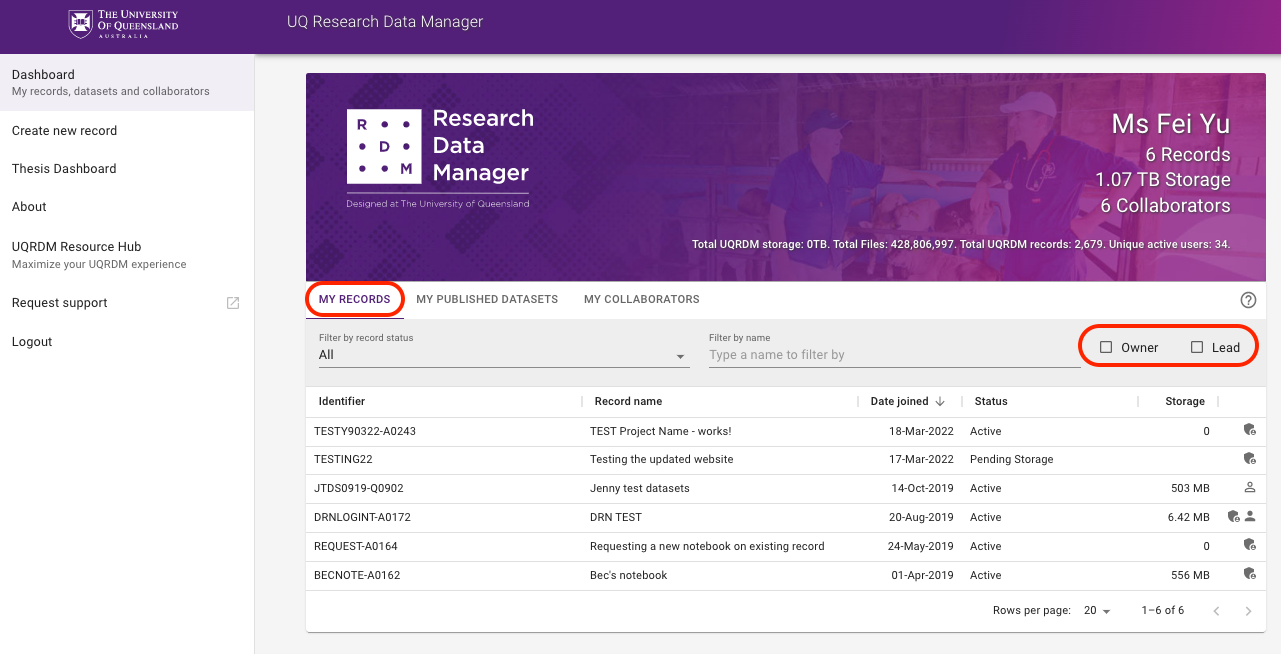 Can a non-UQ person be the UQ lead or owner?

No. The owner and the UQ lead must have a UQ appointment (this includes honorary positions at UQ).

How does the UQ lead approve a record?

Please refer to instructions on how to approve a record.

What do the different "Record statuses" mean?

Pending = A record with a "Pending" status has been approved and submitted by the UQ lead for storage provisioning. Both the record owner and the UQ lead are unable to edit the record during this time (all fields locked). A record will remain as "Pending storage" until data storage has been provisioned (usually within 60 minutes, however it can take up to 24 hours in some circumstances).

Active = A record with an "Active" status has been provisioned with storage. Both the UQ lead and the owner are able to make changes to the record any time after the record is made "Active".

Can I change the project short code?

No. Short codes once entered can never be changed - including when you save the record as a "draft".

Who can see the project record?

Only UQ based collaborators on a record can view the project record. Only the owner/UQ lead has editing access.

How many project records can I set up?

There is no limit to the number of projects that you can set up.

What fields are mandatory to fill out in a record?

To request storage, we ask for a minimal amount of project information. Any mandatory fields that you miss, will show a "this field is required" message as you fill out the record. You will also be prompted to fill any missing fields in when you submit the record.

Should I select the "the project will store identifiable human data" checkbox?

What does "there is an existing legal requirement that the data is to be stored in a particular place" mean?

You should refer to your ethics application and/or your Contract/Agreement (with an industry partner or external institution) to check that the UQRDM system meets the requirements specified. If you are unsure about the requirements specified in your Contract or Agreement, please contact your Research Partnerships Manager. HDR students should also check this with their Principal Advisor.

Can I use UQRDM for managing Honours, Masters or other student (non-HDR) research projects?

How do I link existing grants to my project record?

If you are listed on a current grant, it is easy to pre-populate this information by clicking on "add grant" in the "Grants and funders" section of the create record form.

Note: This section will only appear if you have indicated that the project has current funders/grants.

Once you have clicked on the "add grant" button, it will display any current grants you are listed on - select those that are relevant to the project, and click "Add to record".